We know we are in the Netherlands because we are surrounded by cows, canals and bicycles!

We crossed into the Netherlands from Germany after a very winding route – GPS is great, mostly. Crossing the border we soon had to navigate the Hondsrug (Dog’s Back) mountains. They must be mountains because they have a name, no? This was an early indication of the coming terrain.

Currently we are parked a very scenic marina / waterway / canal place – great services, flocks of migrating geese etc etc. We are a 5 minute walk from Giethoorn, and absolutely delightful residential area. From Niki: The area was inhabited in the 10thC by a community with large goat herds. A sudden flood resulted in these herds being wiped out. Years later, when founding a new settlement, masses of goats horns were dug up – hence giet=goat hoorn=horn.

I can only imagine what a bun fight this place must be in summer, given the number of visitors on a cool Sunday afternoon in October. Every second canal seems to have a boat rental service in operation, there are long barges belonging to operators and restaurants, and the foot traffic forces halts at the numerous bridges. Even so, this was a delightful stop. The high, arched bridges were built to allow barges of hay to be transported along the waterways. I had never really considered farm + barn + canal before!

One of the shops we visited had a huge selection of semi-precious stones and artworks, as well as a large number of fossils. Our family will understand that we spent a long time admiring the works, as well as the range of polished and unpolished materials, and at very good prices too (I think?) 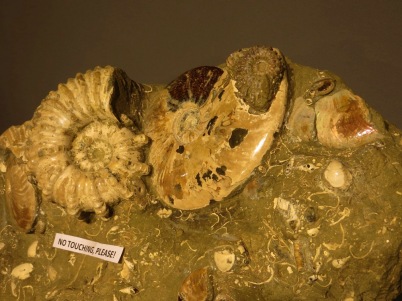 It’s another slow morning as we have a breakfast in the sun. Temperatures are up, sun is out, no wind at all – what’s not to like? With some luck we’ll get a load of washing done before heading off to our next stop at Naarden, apparently the best preserved star fort town in Europe …

One thought on “Netherlands: Giethoorn”