We are currently next to a park on the outskirts of Arras, having had a good overnight here, and looking for a second. The town itself is quite pretty and worth a visit in its own right, but the reason we are here is to visit some of the 20th C battlefields and memorials.

We woke up outside Calais, having committed to a more rapid flight south as the rain teemed down, the wing sped up, and we were doing circles in our ‘what’s next’ discussions.

True to form, we had made a plan and then immediately gone and broken it. We were in France, it is November, Armistice Day Centenary commemorations were going to be held, so why not make the most of this, literally, once in a lifetime opportunity? Resorting to google we found Arras, Vimy Ridge and the Canadian Memorial to be fairly close by – well, 160km away in any case.

What a good decision. The memorial centre is tastefully done, focusing on people and the consequences of war rather than on the heroics. Particularly poignant is the photograph of the last Allied soldier, a Canadian, killed in the war, at 10:58am on 11 November 1918. Two minutes …

The landscape bears the scars of the conflict, twisted and gouged, thrown up in humps and hollowed out in overlapping shell holes. Although much of the area is now peacefully wooded in autumn colours, a 100 hundred years after the last shells, the walk is deeply affective. The sheep? The area remains mostly undisturbed, and sheep are used to graze the grass short, due to unexploded ordinance still being a hazard. 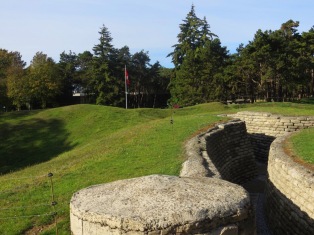 In this particular area the trenches were preserved in the 1920’s, and show how the Canadian and Bavarian lines were, in some cases, only 25 meters apart.

The monument is, well, monumental, in the best senses of the term. It is inspiring, thought provoking, evocative, deeply symbolic. The statue of a young Canada grieving is particularly apt, given the losses in this area.

The cemetery, of course, tells its own story. Out of interest Niki and I counted tombstones which had names, as opposed to the unknown soldiers: 12 named versus 55 unnamed, in one section of a row. Bears testimony to the role played by artillery, the fact that soldiers literally disappeared in the blasts. The Canadian memorial lists the names of almost 12,000 servicemen whose bodies were never recovered or identified. A sobering experience, and one I’m very pleased to have shared with Niki. Having lost friends myself in conflict does add poignancy and reflection to a day like this.