It’s been a gentle few days travelling down the coast, making all of 85km in 5 days. This may well set the tone for our trip around the Peloponnese.  I think that, if the weather improves, we may slow down even further. Woke to the clattering of hail this morning around 4:00am – if rain sounds heavy on our fiberglass roof, then you can imagine that hail is so deafening as to make conversation impossible.

We are currently parked on the wharf in the tiny town of Katakolo, closed until the cruise ship arrives on Monday. The town is clearly geared for this, with 3 ATM machines right next to each other (versus the one per town so far) and prices at the one open tavern just really expensive. What are we using for comparison? Well, yesterday we were at Olympia …

We were up in time to see that the train from Katakolo to Olympia was, as advertised, running, with departure times at 8:40 and 10:30. The 8:30 train departed pretty much on time (at 8:40), and having written down the schedule the day before, we took our time having breakfast, duly arriving at the station at 10:20. Waited until 10:45, gave up, jumped in the van and drove the 35km to Olympia, which was really easy in any case.

I’ve been warned that Olympia is a little underwhelming, and, for the ruins itself, this may be true. We, however, began with the museum, which is just SPECTACULAR! They boast the largest collection of items of war in Greece, as well as thousands of items that are quite breathtaking in their craftmanship and variety.

Three items stand out for me: The massive work depicting the fight of the centaurs and Lapiths, the statue of Hermes, and Militades’ helmet. An odd collection that bears some explanation.

The sculpture of the Lapiths, a Greek tribe, destroying the Centaurs after the latter, drunk at a wedding feast, had abducted Lapith women, is astonishing. The scale of the sculpture also gives an impression of what the Temple of Zeus must have looked like, as well as its impressive size. The figures, the emotions portrayed – how this is captured in stone is just remarkable. 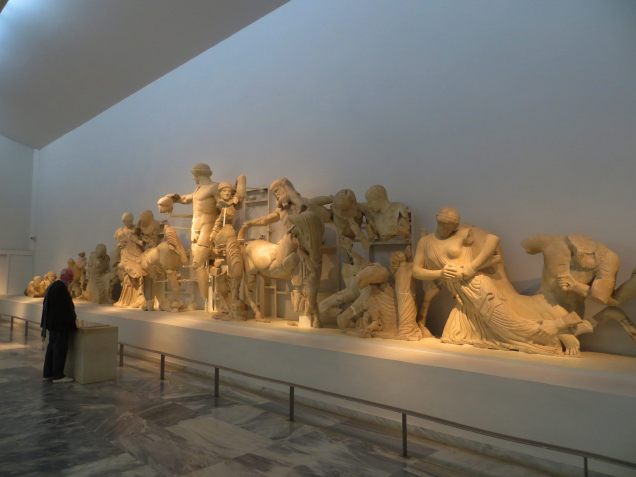 In ‘Gates of Fire’ by Steven Pressfield – a superb read of the battle of Thermopylae, There is a quite heartrending scene when Aristodemos is sent home by the Spartans, blinded by an eye infection. Reviled as a coward Aristidemos redeems himself years later at the decisive battle of Marathon against the invading Persians by charging, alone, at an army reputed to be almost 2 million strong. Interestingly enough, he was awarded no honours as his suicidical charge was contradictory to the Spartan battle plan of a cohesive phalanx. In any case, this is Militades’ helmet, an offering at Olympia following the decisive Greek victory at Marathon. Seriously, how cool is that?

Hermes carries the infant god Dionysus, a superb (the best?) surviving statue of the 4thC BC, with most known works from this time known as a result of their Roman copies. The statue is so fine, the features unblemished, The musculature brings the statue to life and the display, understated, really does allow the focus to remain on the 2.1m high statue. 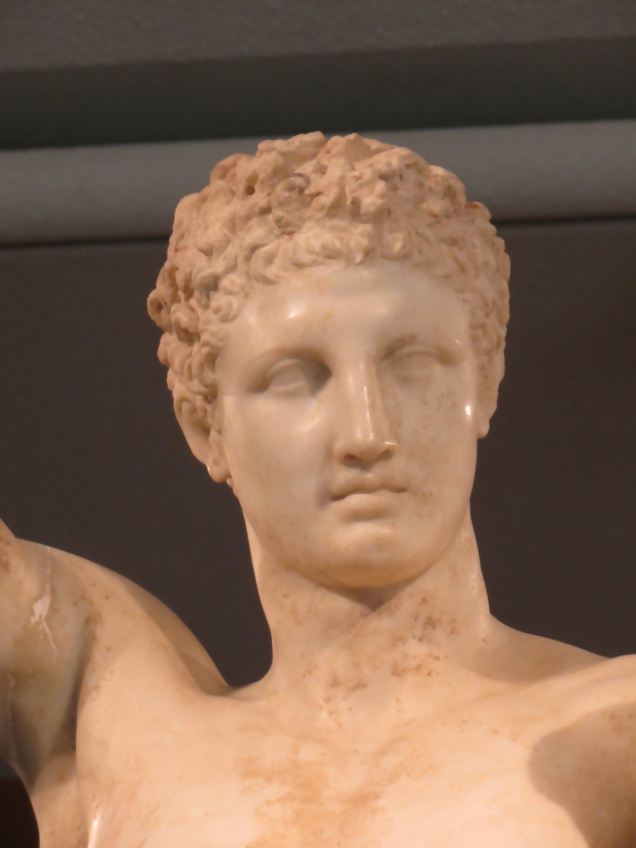 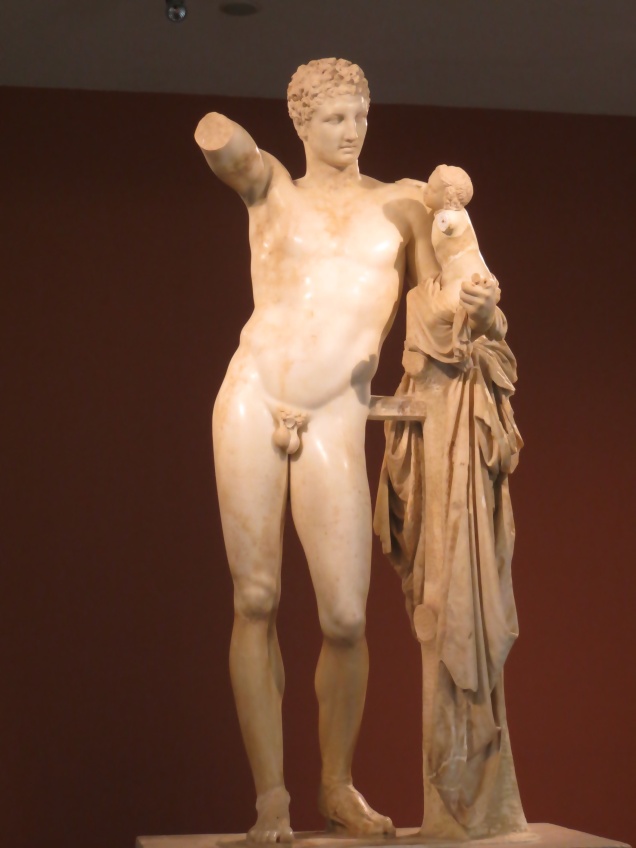 Backtracking a little: After arriving in Patras we drove 20km down the coast to a bar at the beach, spending one night as we just wanted to get our feet under us again. The next day a short (30km) drive took us to the beach at Kalogria, spending 2 nights at a huge carpark (and almost no people), right on the beach. The area is a national park, and we took the opportunity to cycle the park, accompanied by a volume of croaking frogs that was, in some places, load enough that we had to really raise our voices in conversation. This also brought us to an ancient fortified town of Teichos Dymaion, with original fortifications from 1300 B.C, and inhabited until 1700 A.D.

We’ve also fallen in with a German couple, Kallie and Erika, who have, in the nicest way, asked if they could tag along for security until we are past Methoni – there have been a number of incidents of vans being broken into or harassed. It’s sort of like travelling with Niki’s folks. We share our co-ordinates for the coming night’s stop, meet up there and then, perhaps, join for a walk or gentle cycle. This has worked well, and we also appreciate the sense of security this offers – not that we’ve had any issues so far.

I’m asking Niki to do some research on the museum to jog my memory – she’s come back with: ‘Oh, Easter is coming and the traditional meal is roasted whole lamb with tzatziki and olives accompanied by roasted potatoes and spinach & cheese pie.’ Well, Greece may yet prove to be something for everyone!