We enjoyed Narvik so much we decided to stay an extra night. The opportunity to spend a second day at the beach proved to be too much, particularly as, by the time we were up, awake and moving (not necessarily in that order) it was close to 28 degrees. Of course, the sun had been up for 7 hours, even though it was 8 in the morning.

Hearing of the Lunar Eclipse – biggest for this century (?) I made a concerted attempt to see this, but could only find the setting sun, just before midnight. Upon waking, I tried again at around 1:30am, but the sun was just rising. Poor Scandinavians,  missing out on eclipses just so they can enjoy 24 hours of daylight …

Niki has done another fantastic job in getting us to a spot on a causeway to the marina at Evenskjer. We are the only campers here this evening, although quite a few campers came in to use the waste and water facilities (looking at you, U.K.) which are all free of charge. We seem to be doing great with our electricity usage, so being away from power has not been a concern. I’ll do a bit of a write up on gadgets etc at some stage, but for now we are really happy to have installed the 100W solar panel.

Met Gunn today, who was instrumental in getting the climbing structure built here in Evenskjer, which is also the site of the annual December 1 Ice Swim. I can say the water temperature is a few degrees colder than at Narvik, which makes it slightly warmer than Clifton, Cape Town. Growing up there, I simply assumed you got headaches from swimming, never putting the 10C to 12C summer water temperature in context … Anyway, apparently the organisers of the annual swim had money left over and asked Gunn for ideas. She immediately came up with a climbing wall – what a structure, for about €30 000! There is a facebook page for the climbing club, if you google (verb).

A gentle 65km drive got us here early, so we’ve had a great day checking out the jellyfish (multiple species), having a swim, and generally unwinding from the stresses of the day – such as my electric toothbrush seems to have spat the dummy and I’ll have to go manual from here on. Not all cruzin’ you know! 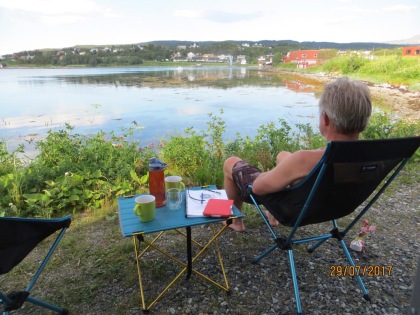 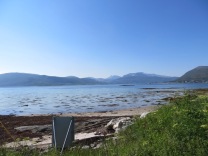