And They’re Off Again!

It’s become apparent that winter has not just hit Norway – We had ice on our roof on our last night there, but it is still only 3°C in the morning and no more that 10°C in the afternoon. We will probably be heading off southwards a little faster than anticipated.

It’s been an interesting 10 days since we last blogged, and has included some time out of our little bobil (Norwegian for motorhome – cute, no?). We had an early morning dash to Oslo airport on Saturday 22nd September followed by a less speedy but more adventurous early morning parking session at the airport. Although we are small we are not quite car-sized, and the openings on offer were less than generous. Onto Ryanair bound for Stansted. On the upside – we got there. On all other sides, well, you get what you pay for. It does seem bizarre to have a company policy in place that absolutely separates a couple travelling together (booked together, paid by one credit card, joined at the hip, clearly in love…) from each other when tickets are issued – unless you fork out another few quid. As a matter of principle, then, we travelled apart. And I slept.

I had a great week in London on a school accreditation visit – if you are in international education you’ll get the sense. Had the opportunity to see a new bit of London, ate out in a variety of restaurant including Thai & Lebanese, didn’t wash dishes, showered / dried / showered again, flushed the loo without counting litres – all in all, highly civilised. Spent a weekend with family in Windsor, where Niki had spent the week – Thanks Chris & John! And then early morning flight back to Norway. Hmmm, making sense of all that: 1) Enjoyed the professional time with colleagues in a school that aims to be different, and is positively successful in doing so 2) Hated waking up with the alarm, putting on a suit and joining the morning workers 3) Loved getting back to the bobil and being on the road again.

We were going to get the front fender sorted out – you may remember this was dinged in our first week in Sweden. Well, 0/10 for my friend who promised to have the fender ready on our return from London, was surprised when we did, in fact, return, promised to call and update us, failed to do so …

So we had a full day in Oslo – rained all day but we put on the waterproofs and set off. What a great day! Started at the Oslo Botanical Gardens – which I’m sure would be stunning in June, but had some bare patches in October – our fault, not theirs! Still, lovely to walk through a great park with some hidden gems, including 5 sculptures by British willow artist, Tome Hare, installed 2014. 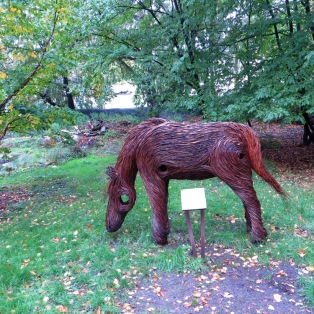 We followed this with a gentle walk around Oslo’s historical fortress, the Akershus, first built in the 1290’s. Views from here across the fjord and into the old part of the city were well worth the effort. The cannons date from the 18th C, but show damage, perhaps from the numerous Swedish sieges. So happy those guys now brew beer! 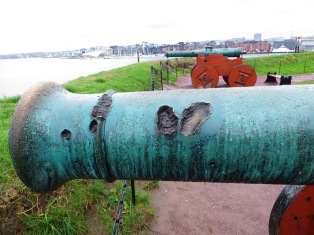 Detail on the cannons. Akershus

Then to Vigeland Park, home to some 200+ sculptures and works of art in stone, bronze and wrought iron. This is the largest sculpture park by a single artist in the world. Completed between 1939 and 1949 by Gustav Vigeland, who was also involved in the layout of the park, the park runs off 1 axis with 5 units portraying various themes. The gentle rain actually enhanced the atmosphere, and we spent the better part of 2 hours wandering through – and still saw only a quarter of what’s on offer.

And then it was off to Langesund for the ferry across to Hirtshals in Denmark. We had a bit of a think on this, and decided that the long drive down south would prevent us from a decent trip down through Denmark.

So we are now currently camped on the northern tip of Denmark, at Råbjerg Mile, a fascinating area of sand dunes currently migrating across the far norther spit. Standing on the dunes you can see where they’ve come from in the west, leaving a flattish landscape punctuated by remnant dunes – and you can see the migration track with the coast in the east, to be swallowed up in the next hundred years. The dunes are like 2 large waves – that’s it, but comprising 4 million cubic meters on the move at 18 meters a year. Nice a quiet, given that 250 000 people visit each year, but we’ve got the carpark to ourselves tonight. 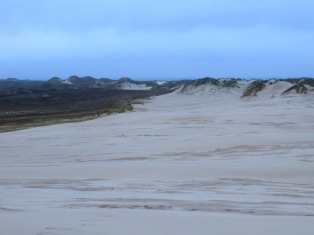 So, after 10 days away, happy to be back home, happy to be on the road. Our gas heating is working a treat, so a quick blast in the morning gets us up, while the duvet is great at night. Not sure what sub-zero would look like, living in the bobil, but heading south means we don’t have to find out!

And Niki finished her puzzle. For fans of Jan van Haasteren. 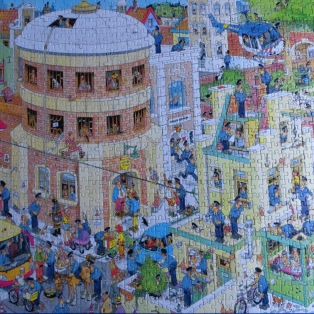